Deep Down Has No Female Characters 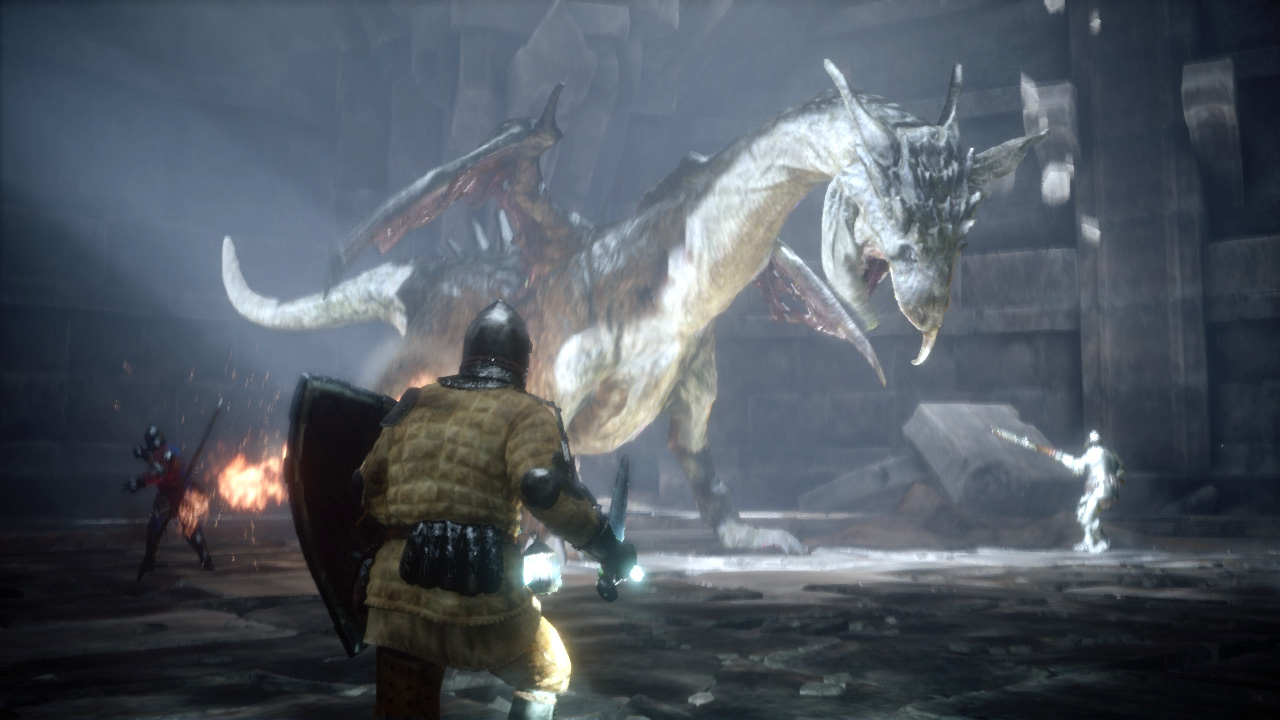 I caught a whiff of Deep Down over the Twitters, and went to check it out. Here’s what Polygon.com had to say about it:

Set in New York during the year 2094, players take on the role of medieval-looking “ravens,” who have the ability to collect the memories of dead or living people, by touching them, their prized objects or the ruins. Deep Down features online co-op with up to four players and procedurally generated dungeons randomly populated by monsters. The game’s system generates items and the environment at random, including treasure chests, traps, ladders and height differences.

Oh okay, so it’s like Assassin’s Creed or whatever, doing the ‘science-fiction wrapped around fantasy’ thing. Well, I kinda liked Assassin’s Creed before it became apparent that all the main games were going to be giant sausage-fests and they killed off the one interesting female character. Maybe I’ll like thi-

HEADLINE: DEEP DOWN HAS NO PLAYABLE FEMALE CHARACTERS ‘BECAUSE OF THE STORY’.

Welp. I’ll just cross that off my list then.

Honestly, I’m okay with this. When a game studio executive sends the message loud and clear that he doesn’t want me to play his game, then I am totally fine with heeding that message and avoiding it like the plague. What kinda bugs me about it, though, is that this is really, really obviously not the reason that there are no female characters in the game.

Oh boy. Have I got news for you.

Let’s summarize here. Deep Down is:

Now, they do have a story, and here’s the start of it:

The stage of the story is New York in 2094. A member of the Ravens with the ability to read the residual thoughts that dwell on items earns his livings by clarifying the story from archaeological sites of ancient cultures. At one point in an excavation in the Czech Republic some ruins from the late 15th century are found. The presence of a mysterious city and the memories of an ancient civilization can be found in the site. The hero receives the request to investigate the ruins and to read its memories.

People are calling this ‘intriguing’, as if Assassin’s Creed didn’t do this exact thing with the Animus instead of with some mystical psychic ability. Apparently Capcom are planning this as a shared world game, a la Dark Souls, so it can’t all be the same character running the dungeons. All signs therefore point to Capcom pulling the ‘historical accuracy’ variant of the story defense out of their collective asses on this one, which is and always will be fucking dumb in a game with dragons and monsters and shit.

But leaving aside the fact that this is fucking dumb, I can’t believe that Capcom thinks anyone is fooled by their ‘story’ excuse in a F2P game that isn’t being sold on the narrative. I can’t believe any developer or game studio thinks gamers are that stupid, when big game studios routinely throw the story/setting under a fucking bus to appeal to the white straight cis 18-30 male demographic. (See EVERY DAMN GAME where women are portrayed as large-breasted fucktoys regardless of their profession, for example.) So I know for a fact that Capcom is full of shit when they say this, and it irritates me because I would really prefer them to be honest about their reasons instead of playing the PR game.

We already know the reasons, and they are as follows:

See what I mean? Honesty. This is always about money, and about the safe bets. It doesn’t make it any less sexist, but it’s the kind of lazy, money-powered sexism I largely expect at this point, and at the very least it’s a nice indicator of which game studios don’t want my business. So, y’know, there is that.

One thing that keeps coming up, in the various comment threads on articles related to this, is the usual deranged bleating along the lines of “Well not all games have to have female characters!” and “But it’s okay to force the player to play a woman in Tomb Raider? Why isn’t that sexist?” I feel I should address this kind of idiocy, at least for the sake of consistency.

No, not all games have to have female characters. But there is a big problem of there being very, very few playable female characters in video games. It is an exceptionally shitty and sexist move to create a game where having a playable female option would make sense, and then restrict it to men only because of reasons to do with money and marketing, and THEN bullshit everyone from here to E3 about it being because of ‘story reasons’.

Forcing the player to play a woman in Tomb Raider isn’t sexist. Why? Because there is a big problem of there being very, very few playable female characters in video games. If you want to play a similar game, but with a male protagonist, you can play Uncharted, for example. It is not sexist to have a player take on the role of a woman in a game that is all about her, for fucks’ sake. It’s also not sexist because sexism means being prejudice against a particular gender, and anyone who thinks Tomb Raider – the game that gave us boob physics – is prejudiced against men probably needs help putting on pants in the morning.

I really don’t know how I can make this more clear. The fact that women are constantly absent or sidelined or treated like mobile boob transporters in video games means that having to play as a male character is not the fucking same as having to play a female character.

The fact that women are constantly absent or sidelined or treated like mobile boob transporters in video games means that trying to include women in your game is a bigger fucking deal than trying to include men.

If you bring up the whole ‘gender shouldn’t come into it!’ argument, you are most likely a white guy for whom gender representation in video games, movies, TV shows, ANY MAINSTREAM MEDIA is never an issue. You’ve got the luxury of thinking that when the whole fucking world caters to you. So imagine, if you will, what it would feel like if video games were wall-to-wall women with the occasional man thrown in there for sex appeal. Then some dumbfuck told you that gender shouldn’t come into it, and it’s all about the gameplay and story, and you should expect to have to play a character with a different gender because video games are all about taking on different roles (even though that role is almost always a woman).

That’s what it feels like when you trot out this asinine bullshit. So, in short, STFU. For once, just accept that when women complain about this, we have a legitimate reason to do so.